Note: Fridays of Intestinal Fortitude is a weekly(ish) feature about food, food and more FOOD. No, I am not an expert, but I do enjoy talking about food prep, cooking food, eating food and making sweet love to food.  Okay, maybe not the "sweet love" part. After all, this is not meant to be an homage to 9 1/2 Weeks.
Recipe Index can be found here.
**********

For awhile now, Lag Liv has been raving about her beef bourguignon.  Recently, Manoj and I decided that we would let beef back in our house once in awhile (we eat beef occasionally in restaurants, but rarely cook it at home).  This meant that I could finally attempt Lag Liv's beef bourguignon.  OH MY.  It was so, so, so good.  And rich and filling and satisfying.  I knew Manoj would be hesitant about it, but I quadrupled the chili powder and a star was born (yes, I quadrupled the measurement -- 1 teaspoon of Indian Store Chili Powder was plenty to put that dish on fire like we need it.)
*****

Recently, I came across this article of 27 Foods You Should Never Buy.  The article is comprised mostly of convenience foods and mostly, I agree with it.  I will still buy some convenience foods because they either keep me from cruising a drive-thru (talking about you Larabars.) or it is a special treat that we particularly enjoy (Seagram's Sparkling Orange Seltzer.  Nope, it is not sugar-laden or even sweetened at all.  It's just carbonated water with a hint of orange, but my kids drink the hell out of it.)
******

Last month, 100 Days of Real Food did a review of 8 cookbooks which would make nice Christmas gifts! (and I still cannot stop lusting after The Homemade Pantry: 101 Foods You Can Stop Buying and Start Making!)
*******

I also enjoyed Casual Kitchen's The "Don't Buy" List for the Low-Budget Kitchen.  This one is definitely worth reading for the comments.  While Daniel's list is usual for some folks, it really depends on what you cook on a regular basis.  For example, several folks in the comments mentioned not need a stand mixer and I would agree.  Other commenters argued for the honor of cast iron skillets everywhere. I would never use a cast iron skillet and I would only use a stand mixer during Christmas time (for the dough feature when I make Romanian kifli).  For me, a stand mixer is a waste of money and precious storage space. I have a hand mixer that has a dough hook and I LOVE it.  However, I know others who swear by their stand mixers and say they use it all the time.  It's all relative, I suppose.
*******

Stephanie over at Completely Irrelevant referenced a fruitcake recipe.  I love fruitcake but only good ones which do not have that glow-in-the-dark fruit that appears to have been grown near a nuclear plant.  However, good fruitcakes are SO expensive, they usually don't make the budget.  Stephanie's recipe looks absolutely delicious and I highly recommend you read her post before heading over to the actual recipe she references.  She has made some changes that make this fruitcake easier to make and more cost-effective.  I have bought most of the ingredients and have added it to the baking list (yes, my baking list which now includes Romanian kifli,  peppermint bark, Christmas Crack and OH MY ZEUS.... Me?  Making sweets?  I don't know who I am anymore.)
*****

Speaking of baking, it seems I was in the market for an apron.  I never knew how badly I wanted an apron until I saw one at our elementary school's holiday mart where this dorktastic, Christmas-themed apron whispered my name. 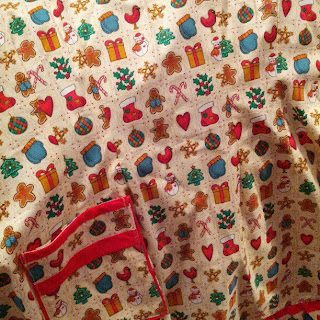 The voice was raspy.  I think it was a smoker.

And now I am going to dig out my pearls because you can bet your sweet bippy, I will be needing them.
Posted by Cagey (Kelli Oliver George) at 9:09 AM

I just can't get on the fruitcake bandwagon. I've tried some recipes that contain only the kinds of dried fruit and nuts I like, but the result is always less than the sum of its component parts as far as I'm concerned.

I can't wait to hear how your fruitcake turns out. Hope you like it!

Average Jane, I hear you. I mean, the recipe I posted is the best fruitcake I've had (admittedly, I have not tried many) and I like the ingredient list, but it's still not something I really would seek out and eat when given other options. My grandparents sure do love it, though! My grandfather was still commenting on it in JULY! An entire fruitcake is not for me, but I was happy to have a piece or two from the extra mini loaf I made from the leftover batter.

Santa brought me a stand mixer last Christmas. While it mostly decorates the counter, there are times that I need, need, need it. I'm willing to sacrifice the counter space for it.

Good luck with all your baking this season. Can't wait to hear how it all turns out.