The Legos Are Winning

One night,  WITHOUT MY KNOWLEDGE OR CONSENT, Manoj made a late-night promise to Arun that the next day, they would trot off to the nearby toy store to buy him a Ninjago Legos set.  In the morning, Arun began his begging in earnest.

Finally, after a long, long day of hearing Arun repeatedly asking about the goddamned Legos (When is Daddy coming home?  What time?  Is he here yet?  What time is it now? How many minutes in an hour? Is Daddy home? What is 60 times 5?  300, right?  So that would be 300 minutes until Daddy gets home? Is it time yet?  Where is Daddy? Is Daddy home? What is 60 times 3 again? 180?), Manoj came home and made good on that promise.

And they came home with this: 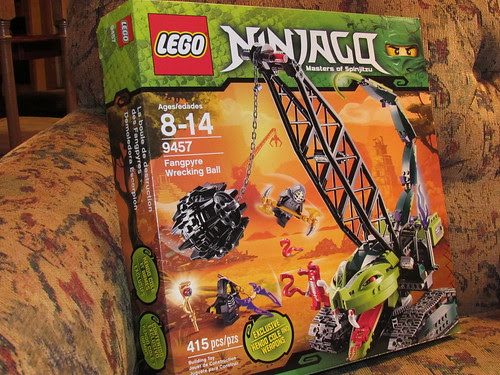 Gentle Reader, this is where I would like to remind you that Arun is all of 6 years old. And for those of you just joining the program, I would like to point out that my husband holds not one, but TWO engineering degrees from two different Fancy Pants Institutions.  Yet, it is Yours Truly (Hint: ME), the one with two paltry state-conferred diplomas (from Kansas, no less) who wields all the power tools in our house.  The same individual designated with the sole responsibility for Toy Assembly in our house.  Furthermore, I have never quite figured out if my situation is due to the fact That I Married An Indian or the fact That I Married Manoj.  Does the blame really rest with an entire sub-continent? Or simply with myself and my choice in life partner?

It was pretty late in the day when ye olde ToyStore Trip was completed, but they got home and Arun immediately opened and emptied ALL the bags into ONE big pile of Legos worthy of a podiatrist's wet dream.   It was only then, that I noticed the bags were numbered and included some vaguely worded instructions about opening the numbered bags "in order".

Arun worked on it for awhile and promptly dissolved into tears with frustration.  Solution?  Bedtime!

The next morning, Arun stumbled out of bed, down the stairs and immediately set back to work. In his angler fish underwear, natch. 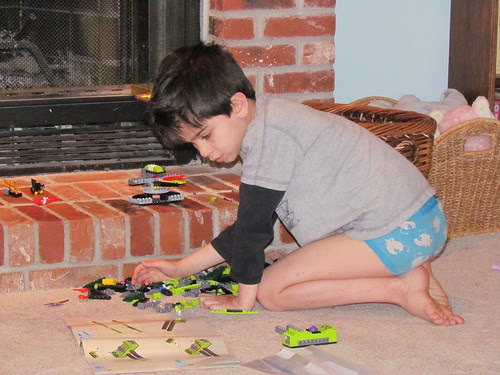 And dissolved into puddles of goo at each point of frustration.  And....... I helped a little.  But mostly? I only provided emotional support.  I was adamant that he build it on his own since I firmly believe the point of Legos is not for a child to watch a parent complete the construction.  Otherwise, what is the point of Legos?  It is not as if you can actually play with the goddamned thing once it is assembled, right?  (Cue the Ominous Foreshadowing) 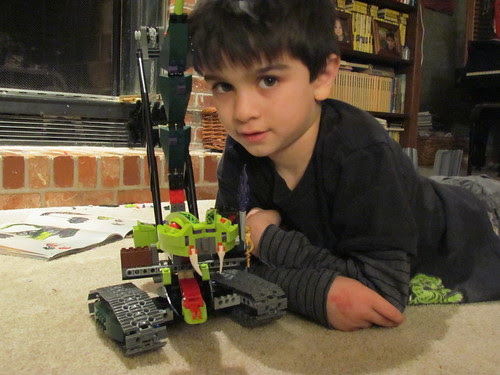 And.... he built it.  I helped with a small bit of the lower jaw of the snake, the crank bit at the top of the crane and the loops for the wheels.  The rest?  All Arun. 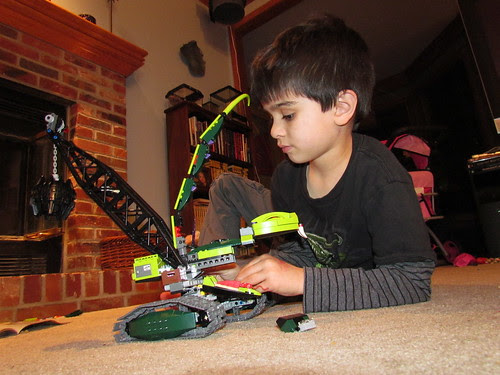 He played with it for awhile and carefully stored it on top of the piano with an official mandate that except for him, only folks aged 8 or older could play with it since that was the official age designation on the box.

This lasted all of 2 days before he dropped it on the tile floor. 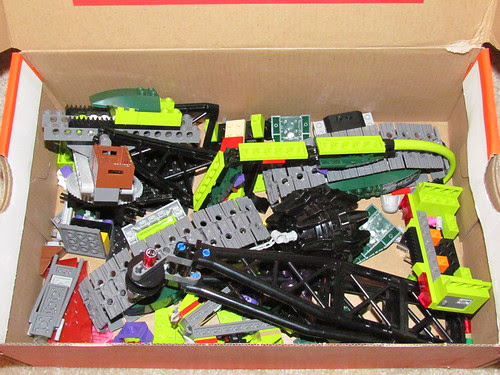 And this is why I always say that Squinkies are God's apology for Legos.
Posted by Cagey (Kelli Oliver George) at 9:08 AM

We do not own a single Lego block yet and I know my days are numbered! But I love that he was able to build it all on his own!

I am only laughing out of hysteria...because I know....I KNOWWWWWWW.

You should see my house. It is like Lego's threw up.