Careful with that axe, Eugene.

Pink Floyd, Relics 1973
Update: I had been mulling this post for a few weeks now.  Writing here and there.  Thinking.  Then, in one fell swoop, I accidentally published the drivel without much proofreading and derailed my entire train of thought, thus forcing me to declare "Uncle" to myself.  Enjoy!

A few weeks back, a silly argument on Facebook about Evolution circled down the drain when one party showed a hand at ignorance and stupidity, then got rude towards the person's Facebook page on which they were posting.  I was pretty irritated with the whole exchange, in particular when the "pro"-science folks were accused of "being emotionally attached to science" in regard to a topic that is pretty clear-cut, folks.  As Kara said, "being pro-Evolution is like being pro-gravity."

Perhaps, this fervent belief in Evolution is why I have all-too-often been attracted to men of foreign extraction.  My unconscious hope that in co-mingling our genetic matter, superior strands would rise above the others and the result would be a premium specimen? A hope for mankind, hence my vigorous defense of which to many is "just a theory"?  No?

When I was upset about the exchange, my mom asked "Why does it matter?  Why do you get so upset?"  I did not have an answer for her at the time, but I have thought a lot about it since (see, Mom!  I actually listen.)

What is the alternative?  To stay quiet?  Then, later Kara wrote about her big mouth.  Gentle Reader, she does not lie.  Kara's mouth is ginormous.

Anyway, I had some grand statement (I think) on how we all have a voice that must not be cheapened by others or by fright and then I was going to end with a swelling note that would make you all cry and rend your t-shirts but instead I totally suck ass as a writer which explains why my Tweets are only $5 a pop and if you have visited your feed reader lately, it is blatantly obvious why my trust capital is worth $0 and why Mom Central dissed me at BlogHer 09. 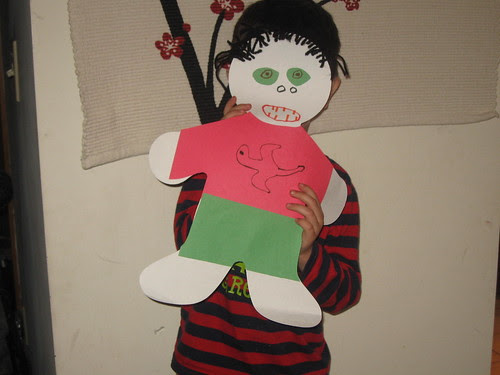 A recent homework assignment .  He was to decorate the paper man in a form that was representative of oneself. My kid? Insisted on decorating his like a monster so he could scare his classmates. Who am I to deny him his artistic inclinations?

A fashionista is still better than a Sandinista. 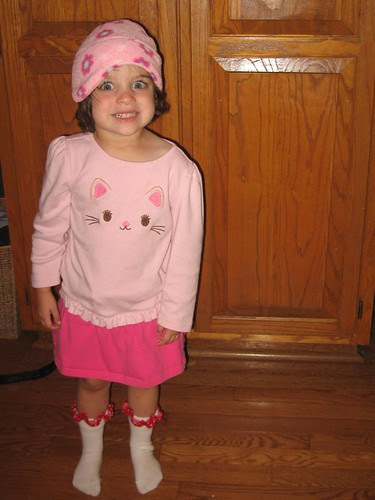 She was our last shot in this Evolution Revolution, folks. Obviously, it was a spectacular failure as it seemed we needed to work on the brain lobe that deals in fashion-related matters. And the "wide-staring eyes" worthy of Pink Floyd lyrics? Sigh. We must now extend our hope to another generation which will not emanate from our own loins.
Posted by Cagey (Kelli Oliver George) at 12:04 PM

First of all, I love that expression on her face, it makes me laugh.

Secondly, on a more scientific note, our Bible study group at church was studying last week about how people are turned off by religion's seeming inability to peacefully coexist with science. It was fascinating to me, because we watched a video of a leading preacher in our denomination who stated that people try to read Genesis as a science lecture, when it was intended as beautiful poetry. It never was meant to say HOW creation occurred, but just that it did, and that God did it.

Anyhow, all that to say this... I am one of the religious types that believes 100% in God, and 100% in the process of evolution. To me, science tells me how, religion tells me why.

Ahhhhhh...the Facebook evolution debacle of 2010. I had no clue a little comment on a stupid article would start such a firestorm. It has really led me to ponder a lot of topics - religion, friendship, education, ignorance, tolerance. It was kind of painful and disturbing to me on a lot of levels, but in the end I was actually encouraged. Sometimes when I sit around in my little SAHM world and talk about kids and recipes and housecleaning and reality TV, I feel like my brain is going to mush. It was kind of cool to see a bunch of people my age get fired up and thinking about something outside of the day to day stuff.

These kinds of posts do no not help your desire to get me on Facebook. I'm afraid to ask about the anti evolution argument?