Last Friday, I promised more posting.  Then, I headed out for lunch and a movie with Team Chaos.  While at that movie, my grandma (89), great-uncle (93) and aunt (69) were in a high-speed car wreck (For those of you in the area, the crash was near Paola on 169, a divided highway notorious for wrecks.) Fortunately, no one was seriously hurt -- the hospital checked out their bruises, banged up ribs, missing toe nails and then sent them on their way.

Then, my grandma went home, fell in her garage and broke her femur.

(Totally Tangential: I recommend that you never, ever break your femur.  Particularly, if you are 89 years old.  Trust me on this, Gentle Reader.)

(Definitely Digressive: Broken bones freak me out.  FREAK! ME! OUT!)

So, I spent Friday and Saturday night in the hospital with my grandma.  Two of the most emotionally wrenching nights of my life.  Her surgery wasn't until Saturday, so Friday was a rough go of things (also, did I mention that broken bones FREAK ME OUT?  Every time she squirmed and writhed in bed, it FREAKED ME OUT that she was going to hurt herself even worse.)  Saturday night was hardly better because as it turns out, 89 year olds do not metabolize anesthesia very well (who knew?!) and every time she woke up, she wanted to get out of bed because she did not necessarily realize that she was in the hospital (Oh!  And just in case I have not already mentioned it, broken bones FREAK. ME. OUT.)

Fortunately for us, we have a lot of family in our family (Positively Parenthetical: Also, the Huggins  cult clan Family is sort of like the Hotel California.  You can check out anytime you like, but you can never leave.  Just ask my mom! She divorced my dad 30 years ago yet still comes to Thanksgiving dinner, along with several other former in-laws.)    On Saturday, many of  us descended upon the waiting room at the hospital.  I should note that our family deals with stress and crisis through inappropriate humor and as such, you are free to feel offended by the rest of the post. 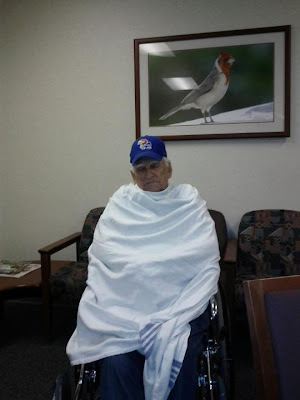 Old Man in Straight Jacket Repose
Much of my extended family is on Facebook.  To pass the time, my cousin Candi and I took pictures of anyone who fell asleep, then posted the snaps to Facebook for the viewing benefit of the rest of the family who were not able to show up to the party hosted in my Grandma's broken femur honor.  My Uncle Ted is not actually in a straight-jacket, but if you met many of the Huggins cult clan  Family, you would wonder why more of us are not in straight jackets.  Ahem.  (Note: No great-uncles were harmed in the taking of photographs.)
Team Chaos Steps Up To the Plate
Excuse me for a moment while I brag on my kids because they blew me away last week.  They were incredibly patient with all of the back and forth to the hospital mixed in with some staying with my aunt.  Anjali has struggled with my staying over night, but she did agreed that we should take care of our family when they are sick.  It was a lot for them to take in during such an emotional week and frankly, I am ridiculously proud of how well-behaved they have been.  I wish I could say that *I* have handled all this stress as well, so perhaps I can learn something from them?
My favorite quote during the week was from Arun when he plaintively asked "So, did they put Grandma's body back together yet?"  Aptly put, little guy.
Inappropriate Emoticons
While it was convenient that so many family members are on the texting bandwagon, it was unfortunate that my smiley face emoticon was right next to the period I so desperately needed to end many of the statements I was trying to text.  Hello there!  My grandma broke her femur and here is a SMILEY FACE to express how I feel about that!

Tablet Tableau
If you ever find yourself in a situation to where you might be sitting for extended periods in a waiting room, hospital or rehab center, I highly recommend that you swing by a Big Box Store on your way to said facility and grab yourself a tablet of some sorts.  I have a Kindle Fire and this thing was worthy of Olympic Gold this past week.  It carried the two books I am reading while allowing me convenient access to Words with Friends, Draw Something, Facebook, my news sites, email, etc.  I was grateful that I was able to just throw it in my purse and not have to hassle with a laptop.   The other benefit of having the trusty Fire by my side is that I was able to battle bigotry and homophobic hatred single-handedly on Facebook.  It was comforting to know that when someone was wrong on the Internet, I could be there in a jiffy to save it from itself!

However, the downside is that when I had the Kindle Fire with me, my daughter was unable to perform her daily toilet-related "ministrations".  Some people need the National Enquirer for their daily constitution, my wee girl needs the Kindle Fire.  *shrugs*

Grandmas!  They're Just Like the Stars!
The first night of rehab, I went to stay with my Grandma to help her settle in.

Me (Snickering): I can't WAIT to tell people my grandma is in rehab.  REHAB! The shame! Should I tell folks that you're in Betty Ford or Promises?  Promises sounds a bit classier, don't you think?

Me: And I am totally going to blame it on the booze.  We don't want folks to know about your little problem with nose candy.

The problem is that when you love someone, there will never be enough time.
Posted by Cagey (Kelli Oliver George) at 11:34 AM

Email ThisBlogThis!Share to TwitterShare to FacebookShare to Pinterest
Labels: all in the family, Have a Heart Tin Man

Can I be IN your family? Seriously.

You are so lucky to have a grandma with humor. When my grandma was in rehab, I would have never uttered the name "Betty Ford" for fear of a history lesson of the 1970's political landscape that would lead to stories about people from the '40's that I didn't know and who died before I was born. Keep the humor. That will sustain both you and your grandma.

I am so sorry that this happened to your grandma. I am sure it has been tough for everyone, but I think it helps to have a lot of crazy family members around to keep things interesting. Your grandma has such a good sense of humor. Can you email me her address so I can send her a get well card? ***Hugs*** to both of you.