Note: Fridays of Intestinal Fortitude is a weekly(ish) feature about food, food and more FOOD. No, I am not an expert, but I do enjoy talking about food prep, cooking food, eating food and making sweet love to food.  Okay, maybe not the "sweet love" part. After all, this is not meant to be an homage to 9 1/2 Weeks.
Recipe Index can be found here.
**********
Awhile back, Anjali and I were at the Asian store here in Olathe and I spied a jackfruit!  Manoj has always spoken of these as being his very favorite fruit in the whole wide world and how his grandma had a jackfruit tree and wow, it is the best fruit ever, OH.MY.GOD.  I have always wondered about this mysterious fruit that somehow trumped the mango (because in MY book, a fresh ASIAN mango is hard to beat.  And hard to find in America.  Grrr....)

Anyway! I lugged the thing home and Manoj immediately pronounced him vastly under-ripe.  It was going to be awhile.  I spent the next two weeks carefully rotating him.  And stubbing my toe on him so often that I dubbed him "Jack the Tripper".   And explaining to anyone who visited that no, it was not a durian, the famous stinky fruit (And also listed in the post I once wrote about Freaky Foods)

I also began to harbor an imagined kinship with Daenerys Targaryen as I pondered what in the FUCK was inside that thing. 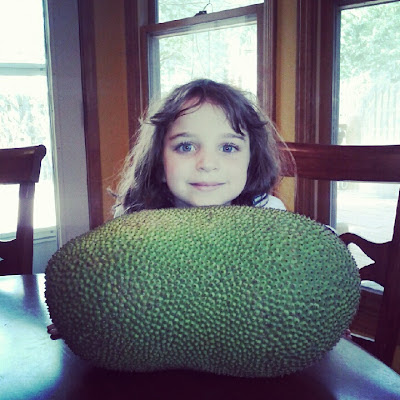 We named him Jack. 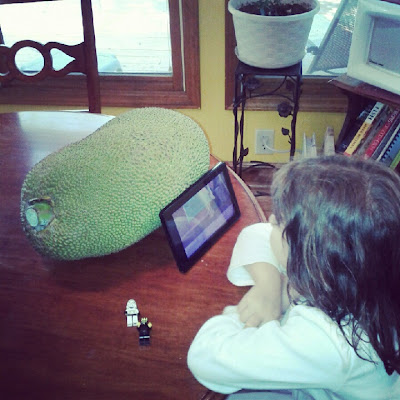 And then we put him to work.  He was going to be staying awhile and rent don't come cheap, y'all. 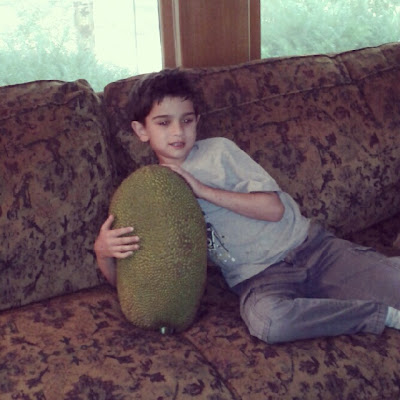 Ah, so sweet -- Arun is bonding with Jack.  This reminds me of my pet pigs, Mickey and Judy.  I wonder whatever happened to them? 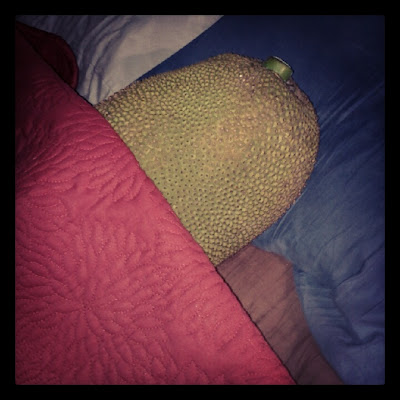 Go the f*ck to sleep, Jack 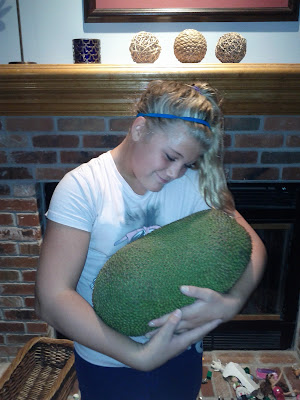 Miss H says, "I'm gonna love him and pet him and squeeze him and call him Jack George" 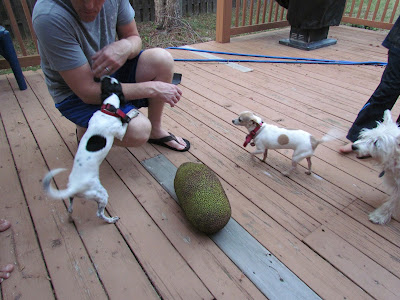 The anticipation!  Arya and Scout sniff suspiciously at what appears to be an egg. An egg that could very well contain another Chihuahua. 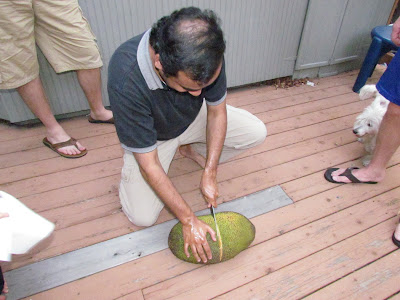 Manoj slathered his hands and forearms with coconut oil -- Jack was a sappy, sticky mess.  Think banana sap on steroids! 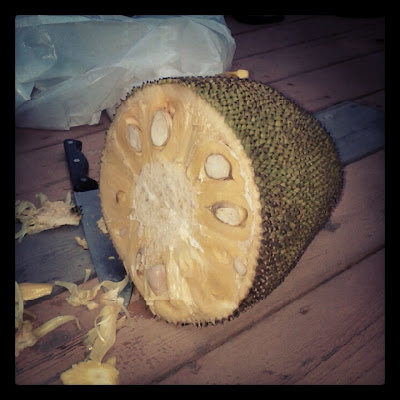 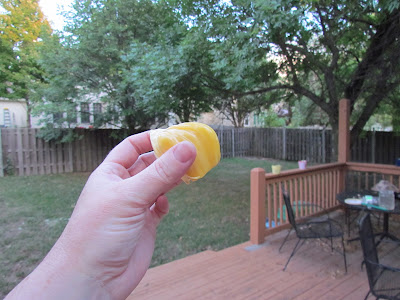 A single "pod" which had a hunka-chunka seed in the middle the size of a walnut.

Verdict?  It had a texture that was slightly rubbery.  It was not overly sweet, which was surprising to me.  The taste was very mild and fruity. It was not overly cloying and it had a milky finish.  It tasted as if a banana, a mango and a cantaloupe had just conducted a lusty, torrid Ménage à trois  and Jack was the prickly progeny of that lovefest.

Would I buy one again?  Yes.  For one, I was recovering from a cold so my sense of smell was completely off, so I would like to try this again.  Also, this is Manoj's favorite fruit and one of the few things he talks about wistfully from India.  I would gladly spend a few weeks stubbing my toe on a daily basis just to see him happy like that.

Jack is huge! Is there anything else that can be done with one besides eating it raw?

hi, long time reader of your blog & been enjoying it.
save the jack fruit seeds & boil it for around 10-20 minutes or until you can peel off the slimy brown skin and you'll get great tasting seeds of the jack fruit where you can just eat it by itself. makes for a fantastic snack too :-)

Your kids are so beautiful!
I've only had jackfruit cooked, which I've always hated. It didn't even occur to me that you could eat it raw.

You invited him into your home and made him a part of your family. Then you killed and ate him?

oh my goodness. Gut-splittingly awesome blogpost. What a freaky interesting adventure this fruit became for you. Thank you for dragging me along. Wish I could taste it.