Note: We are having a spectacular holiday season this year.  I do have a post lurking in my gray matter about all of the silliness and fun that we are having.  Today's post is a little somber for me, but these are feelings that weigh so heavily on my heart, I need to let them out.  I promise my next post will lighter in nature. 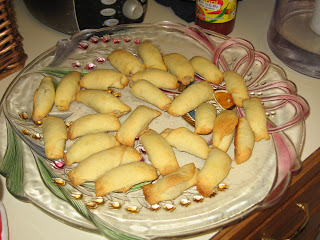 A plate of Romanian/Hungarian kifli eye the nearby bottle of Indian Maggi sauce with concern as they wait patiently for a romp in a bowl of powdered sugar.

Long time friends, followers, lurkers, readers, foes, frenemies know that baking is not my forte.  Oh sure, in an odd turn of events, I make a kickass crème brulée, but when it comes to things that involve flour and baking soda and baking powder and trying to determine when to blend, when to mix, when to fold, it inevitably becomes a disaster while figuring out how clean that knife was before I stuck it in the middle and seriously, folks how dark of brown can we go before it burns????

Oh sure, occasionally, my baking attempts are edible. That is, if you scrape off the burnt edges or do not mind eating cake with a spoon.

I am not a crazy sweets person, but when I find something I like, I die a little inside (See also: fruitcake from Andres, my grandma's peanut brittle and the cheesecake made from scratch by my friend Celeste. Oh, and plain white wedding cake with buttercream frosting.  When folks choose weird wedding cakes, it makes me want to steal their gift back.)

Quite simply, food and baking have never been a grand holiday tradition in my family - my parents were always about the music, lights and the Christmas tree (the best was when we would trudge through our own property to find the perfect tree.  Oh yes, I complained at the time, but now I treasure that memory with my dad.)

Years and years and years ago, my friend Jolene gave me a box of Christmas cookies.  They were Romanian Christmas cookies, also known as kifli, and they came from a recipe handed down through her family, back from before her great-grandma had even come to this country.  These cookies were so very awesome, they melted in my mouth, a bit of heaven (even for an agnostic like me.)  Not too sweet but a bit too rich, they are a lovely, rolled cookie with a cream cheese dough and a fruity filling, covered in powdered sugar.  I raved about these cookies so much, that it became a tradition for Jolene and her mom to send me a box nearly every year.

A few years ago, Manoj and I went on a great adventure to learn how to make them ourselves.  Jolene would not give me the recipe and insisted on sending me the cookies instead (that is typical Jolene, always wanting to do for others.)  Still, Manoj and I wanted to try our hand at these, so  I enlisted the help of a Romanian co-worker and found a recipe. (Updated!  I have written down the recipe I now use. ) I use this Kifli II Recipe at Allrecipes.com (Note: For some reason, I always end up with too much filling, so I make an extra set of dough.)  It is slightly different than my friend's recipe, but it works.  For several years, it took Manoj and I all we had to just make a single batch, and we'd end up with only enough for us to consume, certainly nothing we would give away.  Our kifli were ugly with the insides often oozing out, but they were still edible.

This year, I set myself up to major goal.  I was going to make enough kifli to give away, to take to Celeste's annual cookie exchange and in particular, enough to send to Jolene.

Jolene is my friend who was diagnosed with inoperable pancreatic cancer in mid-2008.  She is still fighting this cancer, but she is quite sick most of the time.  I am not sure if she will have the energy to make these cookies.  This is why it became an all-encompassing goal to me that I MAKE THE KIFLI.  For her.  For her husband.  For her mother.  For her daughter who will celebrate her 3rd birthday this month.

On Sunday, I got out the new hand-mixer I had bought - just a simple Oster, but it has dough hooks - so, so, so important (as I had learned the hard way in past years!)  I had decided to triple the filling recipe and to quadruple the dough - this meant that I would be making 16 dozen cookies.  I got the dough ready to go, portioned out smaller balls of it, wrapped them in plastic wrap and set them in the garage to chill over night.

On Monday, I got out the detailed instructions and illustrations that Jolene's mother sent me last year, I set up my newly purchased Norpro pastry mat (LOVE.) and I got to work immediately.  Rolling, rolling.... filling, filling....baking, baking.  All day long, I stood at my counter, rolling kifli after kifli after kifli.

And all day long, I thought of my friend.  I think of her every day, this is not uncommon.  But the act of making this cookie for her, this treasured cookie that has spawned so many family memories that she has shared with me made me teary-eyed throughout the day.  I thought of our all-night study sessions as under-grads, when we would get so sleep-deprived and begin giggling for no reason. I thought of how she would borrow my driver's license so she could go out with her friends.  I thought of how for years, she signed my Christmas and birthday cards as "Kelli Oliver".  I thought of our roadtrip when we moved her to Phoenix and how I drove her and her brother crazy with my non-stop talking in the tight, cramped car.  I thought of our many trips to Vegas and the late nights at the roulette table, the early mornings at Denny's.  I thought of her wedding, the chaos and how I acted a bit like a brat during part of it.

I thought of how a weird, bizarre misunderstanding between us led to a year and half of not talking and how she reached out to me through a Christmas card, after which, we reconnected.

In my Christmas card to her this year, I apologized for acting like such a brat in the past.

I don't talk much of my friend here.  It rings falsely maudlin to talk about my feelings regarding her cancer.  Good grief, how presumptuous of me, right?  Right.  However, I did want to talk of her today because I wanted to remember the day when I finally realized exactly how baking can be such an act of love, what all of those stupid Pillsbury commercials are getting at.  Why it is such a important ritual in so many families.  When Arun helped me measure and mix and pour and roll, I began to see it.  When he later thanked me for making those kifli and told me how much he loved them, that is when it clicked for me.  This baking thing.

I hope Jolene will be able to make her family's Romanian kifli this year with her daughter.  I hope someday, she will discover that her daughter had a kifli fight with her friends by blowing powdered sugar all over the house (just as Jolene's brother did so many years ago, a memory shared with me, a memory I still laugh at.)

Email ThisBlogThis!Share to TwitterShare to FacebookShare to Pinterest
Labels: Have a Heart Tin Man

This made me cry.

I hope that for your friend, too.

Bake your heart out, Girl.

My hopes and heart are with your dear friend.

This made me teary as well. Your love for your friend is so apparent through your words. It also makes me sad that my own friend, who distanced herself from me for unknown reasons, still won't respond after I've reached out numerous times.

The kids and I will be doing some baking this year as well. It's not really my thing, but they have so much fun helping me that I can't resist.

You mentioned a "fruity filling" -- did you use a fruit filling or the walnuts in the recipe? I have a sudden urge to try making these.

I love this post, thank you for putting these sentiments into such eloquent words. My thoughts are with Jolene- this is a lovely gift you're giving her.

What a blessing those cookies will be to Jolene and her family this year. Thank you for sharing the joy and love you rediscovered during your baking.

what a lovely tribute to your friend. You know I know. And it sucks monkey balls.

Welcome to the baking sisterhood too!