I prefer my crow served warm, smothered in Cholula sauce.

I warned you about the banal.  But I am trying to spur myself back into some sort of regular writing that actually makes its way out of my Moleskine.

So, the other day, I admitted Disney Defeat and bought the goddamned Tinkerbell movie.  Anjali is completely enchanted with that wee sprite.  As Anjali says, "Mama!  She wears GREEN and she has WINGS and she can FLY and so can her FRIENDS."  To which I reply, "Give anyone enough PCP and that will happen".  Deaf ears, I am telling you.  DEAF EARS.  However!  As I am completely enchanted with Anjali herself, the other day,  I found myself with my forked tail between my legs when I exposed myself for the sad, deluded hypocrite that I am as I duly surrendered my credit card to the sullen teenager at Best Buy.   Enchantment?  Why yes, pass that shit around.

As Anjali tumbles down a Disney-infested rabbit hole, Nintendo has tightened its steely grasp around Arun.  Who needs friends (or a life) when you have Mario?  When he is not playing Super Mario Bros, he is an avid student watching You Tube videos of equal-minded gaming geeks playing the game while offering instruction.  Each morning, he stumbles to his laptop, logs on and gets going (and yes, he has his own laptop - a freebie we won.  We are a Household of Technology around here.  And yes, I get a variety of reactions on the matter.)   He is even watching the old, low-pixellated versions of Mario clips from the days of yore known as Super Nintendo- respect the vintage, dude. In fact, we have Mario in 3 different incarnations - mid 90s era Gameboy, Nintendo 64 and of course, the Wii.

Speaking of the Wii, I tweeted yesterday: 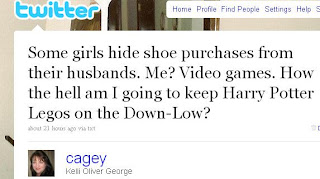 Last night, Manoj took the kids to the pool (anyone else snickering at South Park past references to "kids" and the "pool"?  Anyone?  Anyone? Bueller?)

Anyway! The garage door was still going down as I scrambled to jam the Harry Potter game into the Wii.  And...... Oh MY.  This game rocks.  Great animation, stellar scenery, easy to operate and...and! they use the same music from the movies.  Score! (or Gooooal!! ?)

Last night, I casually mentioned to Manoj that a new Legos game had been released but I am not sure how much longer I can keep my new love affair a secret.

Question of the day!
What is your policy/stance/opinion on technology and kids?  If your kids are playing video games, etc, how do you set time limits?  Are you more relaxed during the summer?   Arun's laptop is set up in our dining room and that situation will not be changing for long, long, long time.  I don't see myself letting my kids hide in their rooms with televisions or computers.  Never say never, but I really want that stuff out in our common areas.
Posted by Cagey (Kelli Oliver George) at 8:38 AM

Zach has gotten really interested in video games over the last 6 months or so. Between his Leapster, my old Gameboy Advance, the original NES, the Gamecube and the Wii, he is getting a lot of screen time in these days. It is somewhat limited by the fact that we are rarely home long enough to play, but he still manages to find some time. He just got the new Toy Story 3 game for the Wii and I'm dying to get my hands on it!

As far as TV's and computers, they are out in the open - not in the kids' bedroom for sure. They do have a TV in the playroom, but it is in an open area as well and can only be used for dvd's and video games (no cable).

As long as Caleb would still rather go outside and play than watch t.v. (he doesn't game yet)I try not to worry about setting limits. When he starts whining to turn on the t.v. I figure he has had too much and we leave it off for a while.

I'm with you on the bedroom thing. I don't intend to have t.v.'s or computers in the bedrooms. That stuff is for common areas. But best intentions....

Oh, and by the way, the Tinkerbell movies are among my favorite of the "girly" Disney movies. That Tinkerbell is one tough cookie. (My son is rather fond of them as well.)

We haven't developed much of a stance on technology for our children, but our one year old daughter loves to watch videos on you tube and play with the tv remote. And there's no fooling her with a non-working remote. She knows thing makes the other thing change pictures.

Frankly, I'm not too worried about it. I think we will keep the computers and tvs out of their bedrooms, but I don't have a problem with them starting early.

Our kids ditch tv, games, anything techno for the outside in a heartbeat. Alex loves "playing" the gameboy advance (watching mario race mostly), but not that big into games (yet). Kenzie loves her TV time... she's a veg like I like to be, but she plays super hard too...

With all that said... at work we are partners with a group so here's the plug with some good guidelines to follow with kids: 5-2-1-NA http://www.getupmc.org/get-up-get-fit/5-2-1-almost-none/

Never heard of such a good post until finally I came upon this website Sanggarhost.com Web Hosting Gratis, Murah, Terbaik dan Berkualitas di Indonesia, so
thrilled I did really want you to post again about cara mempercepat koneksi internet tri and Cari Backlink Berkualitas Switch Case Pada Java right away and will probably come again in the near future.